Ginger—Anti-Inflammatory and Analgesic in Dysmenorrhea

Zingiber officinale, known commonly as ginger, has been widely recognized for its action as an anti-nausea remedy. However, Traditional Chinese Medicine has used ginger as an anti-inflammatory agent for musculoskeletal complaints for more than 2500 years.[1][2] Ginger is classified as an herb of the Zingiberaceae family, shared among many other anti-inflammatory herbs such as Turmeric (Curcuma longa), and Galangal (Alpinia galanga).[3]

Researchers have been investigating the constituents responsible for the analgesic and anti-inflammatory properties of ginger with some promising results for its pain-related medical applications. Although not conventionally prescribed for pain in Western medicine, ginger may be a novel treatment for dysmenorrhea in women who cannot tolerate, or who have contraindications for, the use of non-steroidal anti-inflammatory drugs (NSAIDs) and oral contraceptive drugs.

The use of ginger as an analgesic has been studied in Denmark and the United States for arthritic pain and muscle pain post-exercise (delayed-onset muscle soreness).[4] Its analgesic action has been attributed to its ability to stimulate the release of ß-endorphin, an endogenous opioid neuropeptide.[2]

Interestingly, other studies have also looked at ß-endorphin levels in chronic pelvic pain. Men who were diagnosed with “Blood Stasis” by a doctor of Traditional Chinese Medicine (TCM), which in this case pertained to patients with chronic pelvic pain, showed significantly lower levels of circulating ß-endorphin.[5] The TCM diagnosis of Blood Stasis also describes women with dysmenorrhea, endometriosis, dark clots in menstrual flow, and overall sharp and severe throbbing pain.

When ß-endorphin levels were tested in women with Premenstrual Dysphoric Disorder (PMDD), it was found that not only did they have lower circulating levels of ß-endorphin, both the follicular and luteal phases of the menstrual cycle, but patients also experienced decreased pain thresholds and tolerances.[6] Therefore, lower levels of ß-endorphins may be pathophysiologically significant when addressing chronic pelvic pain.

Constituents found in ginger root such as 6-gingerol and gingerdiones have been shown to inhibit cyclooxygenase (COX) and lipoxygenase enzymes, which lead to an inhibition of the synthesis of leukotrienes and prostaglandins.[1][2][4][7] It is by this mechanism that anti-inflammatory effects are seen when used in patients with rheumatoid arthritis [10], and also dysmenorrhea.[2][9][11] Pharmaceutical inhibition of COX has been used for decades for pain and inflammation. Most notable are COX-2 inhibitors such as celecoxib for arthritic conditions, and NSAIDs such as ibuprofen and naproxen which block both COX-1 and COX-2 enzymes. 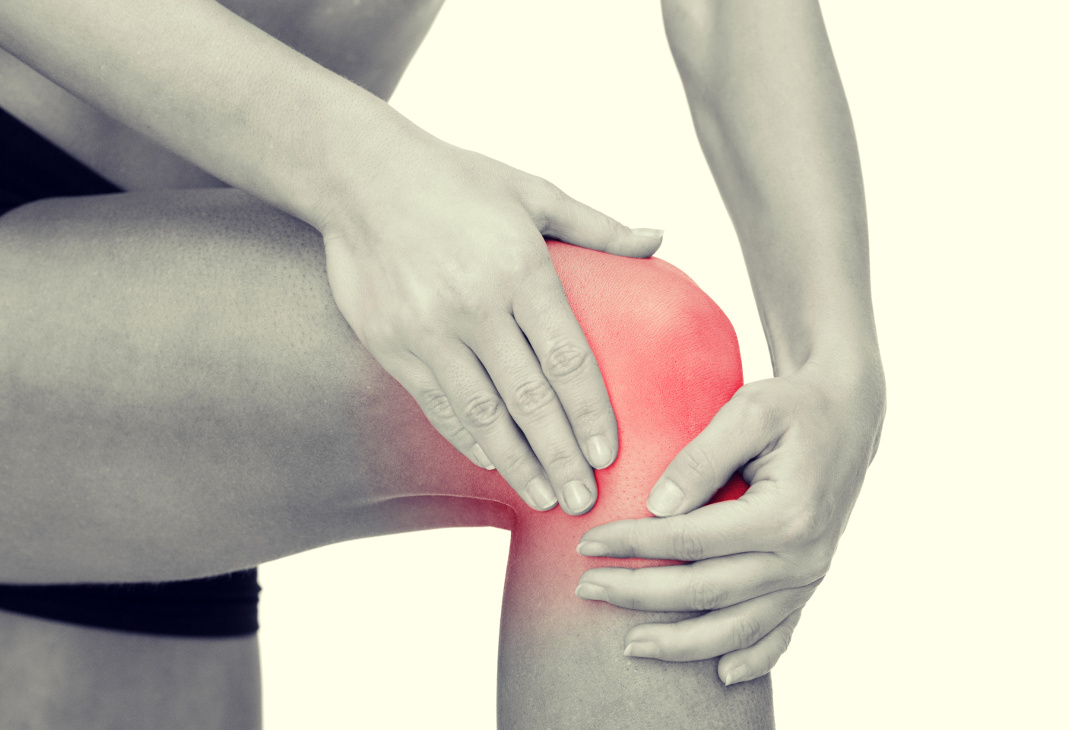 Research on a specific ginger extract, Eurovita extract-77 which combines Zingiber officinale with Alpinia galanga, showed that it was able to inhibit the induction of several genes associated with inflammatory responses, including those for cytokines, chemokines, and COX-2.[9] One study in patients with osteoarthritis showed that, taken as 225mg twice daily for 6 weeks, Eurovita extract-77 significantly reduced pain and stiffness compared to placebo.[10]

A complementary mechanism of action may be in how ginger affects circulation: As an effective stimulator of peripheral circulation, ginger may help in alleviating cramping pain.[8] This ties into our TCM theory whereby Stagnation or Stasis of Blood results in a deep stabbing, throbbing pain; Therefore symptoms may be alleviated with improved circulation, also described in TCM as “smooth flow of Blood and Qi”, most notably as Liver Qi and Liver Blood which affect menstrual flow.

Acting as an inhibitor of inflammatory pathways, an enhancer of peripheral circulation, and an effective analgesic, ginger should be highly considered as an alternative or complementary treatment for dysmenorrhea.

Dysmenorrhea is characterized as severe menstrual pain which occurs in up to 50% of menstruating women, most often within the first few days of menses.[2] Primary dysmenorrhea specifically, is diagnosed in the absence of any identifiable pathological conditions that would lead to said pain.[4] Occurrence of pain has been attributed to an increased production of prostaglandins within the endometrium[1] and increased activity of COX-2.[7] Researchers have found higher levels of prostaglandins F2-a and E2, and leukotrienes in women who experience dysmenorrhea compared to those who do not experience any menstrual pain.[11] Activation of these inflammatory-associated substances may also lead to increased pain sensitivity.[4]

Studies have shown that dysmenorrhea can affect academic performance, social activities and sports activities in young women.[11] Conventional treatment consists of oral contraceptive medications or progestin-releasing intrauterine devices, and NSAIDs which are typically first-line therapy for acute menstrual pain. Those that have shown efficacy for use include ibuprofen, naproxen, mefenamic acid, and aspirin.[1] That said, the failure rate for menstrual pain relief with these treatments stands between 20-25%.[2] It’s also common for some women to avoid their use due to common side effects such as nausea, dyspepsia, and other gastrointestinal disturbances.[1] Efficacy of Ginger for Dysmenorrhea

Studies addressed in meta-analyses of ginger’s efficacy in primary dysmenorrhea most commonly used a dried ginger rhizome powder as the treatment form. These preparations, ranging in dose from 1000-1500mg, were standardized for weight of ground ginger powder, but not for gingerol or
other constituent concentrations.[3][4] Nevertheless, positive and statistically significant improvements in menstrual pain were seen almost across the board:

A double-blind placebo-controlled study by Rahnama et al. (2012) investigated the efficacy of ginger for pain relief in women with moderate to severe dysmenorrhea.[7] Treatment consisted of 1500mg of encapsulated dried ginger powder given daily on days 1-3 of the menstrual cycle. Results showed that ginger elicited a significant decrease in the duration and intensity of pain compared to placebo.[7]

When compared against both ibuprofen and mefenamic acid individually, Ozgoli et al. (2009) showed that ginger had a similar efficacy rate.[1] Patients with moderate to severe dysmenorrhea were allocated to receive one of the three above treatments. Pain severity and satisfaction of pain relief were comparable between the groups with a 62% success rate with ginger, 54% with ibuprofen, and 44% with mefenamic acid.[1] In contrast to other studies of this kind, Ozgoli et al (2009) used a scale based on the limitations of activities of daily living due to pain as their outcome measure, where most other studies employed the Visual Analogue Scale (VAS).

Jenabi et al (2013) also found positive results with ginger treatment where 82% of female subjects found benefit in ginger for the reduction of menstrual pain.[11] This was a small study (n =35), with treatment of 1500mg of dried ginger powder taken in divided doses on days 1-3 of menses; however, the change in perceived pain was quite significant with a decrease greater than 3 cm on the VAS.[11] There are limitations to these studies and they
warrant further investigations. Many studies
tested treatments for only one menstrual cycle.
As many women understand, each menstrual
cycle may involve a slightly different experience.
That is, pain may vary from cycle to cycle; dietary
and exercise factors can also influence pain and inflammation, as could hormonal levels of
progesterone and estrogens. However, as an acute treatment, ginger may be an excellent substitute for NSAIDs, with a superior safety profile for women.[4] Grzanna (2005) even goes as far as to suggest that ginger may have a better therapeutic action for pain and inflammation as it is a dual inhibitor of both COX and 5-lipooxygenase enzymes[9], compared to pharmaceuticals which isolate COX inhibition.

This mechanism makes ginger a valuable addition to NSAID use as the complementary action would enhance that of NSAIDs and therefore allow for a decrease in pharmaceutical dosing.

Although ginger’s safety profile outperforms its pharmaceutical counterparts, there are always limitations when it comes to dosing. Human pharmacological studies have shown that in large doses, upwards of 12-14g, ginger can reduce platelet aggregation and therefore enhance anti-coagulant drugs.[8] That said, this study reported that there was no difference in bleeding times between treatment and placebo groups.[8]

Common dosing for motion sickness or seasickness ranges between 1-2g of dried powder as a single dose.[12] In TCM, dosing in pregnancy has been prescribed up to a max of 2g per day of dried ginger.[8] 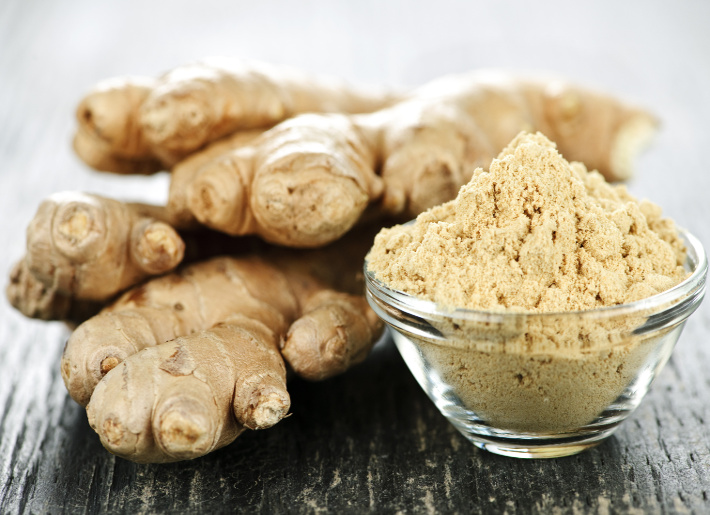 Patients with osteoarthritis found a significant
reduction in symptoms with ginger extracts of
340 mg-1020 mg daily, and found to have similar
efficacy to diclofenac.[1][3] Based on these
findings and those in the studies discussed
above, it would be reasonable to apply a
dosage of 1-2g of dried ground powder, divided,
daily for the treatment of acute menstrual pain.
Further studies may be needed to assess the
efficacy of daily dosing outside of days 1-3 of
menses for other conditions of chronic pelvic pain.

One promising aspect of ginger for pain is that it can help reduce or eliminate the need for NSAIDs. It may also save some women from having to use synthetic hormonal therapy in the absence of irregular cycles or other hormonal imbalances.

In general, treatment with ginger has shown to be greater or comparable to pharmaceutical anti-inflammatories in reducing both acute and chronic pain.[3] This may provide a safe and effective alternative for women who either cannot tolerate the side effects of NSAIDs or who have a contraindication for their use.[1][12] It may also help to decrease dosing of NSAIDs when used in conjunction with ginger as they have similar mechanisms of action on inflammatory pathways.

Further research is needed to thoroughly investigate the differences in outcomes with dried root powder preparations compared to specific extracts standardized for compounds such as gingerols, which appear to be the active constituents responsible for the inhibition of prostaglandin synthesis, similar to NSAIDs.[1]