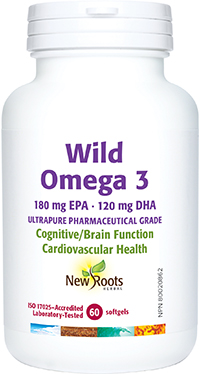 Fish oil is probably the most important dietary source of omega‑3 fatty acids, which are vital nutrients. Omega‑3 fatty acids are one type of essential fatty acids, special fats that the body needs as much as it needs vitamins. Much of the research into the potential therapeutic benefits of omega‑3 fatty acids began when studies of the Inuit people found that, although their diets contain an enormous amount of fat from fish, seals, and whales, they seldom suffer heart attacks or develop rheumatoid arthritis; this is presumably because those sources of fat are very high in omega‑3 fatty acids.

A further benefit shown from the consumption of fish oil is in the production of eicosanoid compounds; these compounds regulate the communication between cells. The species of eicosanoid produced from omega‑3 fatty acids, as opposed to omega‑6 fatty acids, seem to better regulate immunological responses, such as the body tissues’ response to injury or disease.

Omega‑3s are part of the cell membrane composition; that’s why they are called “structural” fatty acids. The more you absorb these precious fatty acids, the healthier your cells will be, and the better the communication will be between them.

Adults: Take 2 softgels twice daily with meals or as directed by your health-care practitioner.

Store in a cool, dry place, away from heat and sunlight. Do not use if seal is broken. Keep out of reach of children.

Download Pamphlet
Available Sizes
Related Products
Olive Leaf Extract (Liquid)
Excellent source of antioxidants for the maintenance of good health Infused with peppermint essential oil
Learn More
Tingsation
For sensitive or tingling toes and fingers Features seven synergistic ingredients that penetrate and soothe skin of the feet and hands
Learn More
Organic Cardiac Health Tincture
Used in herbal medicine to help maintain cardiovascular health in adults.
Learn More
B12 Liquid
Our highly bioavailable B12 Liquid is a convenient and effective delivery method for this critical vitamin.
Learn More
Elderberry ResQ Fruit Tincture
Elderberry ranks globally among the “go-to” botanicals proven in numerous studies for not only reducing debilitating symptoms of influenza but also its duration.
Learn More
Red Palm Fruit Oil
Excellent source of vitamin A Source of vitamin E Sodium-free Great alternative to olive oil Perfect for soups, sauces, and sautéing
Learn More
Related Articles
Targeted Use of Fish Oil: A Review of the Evidence
Oily fish and fish oil are the richest sources of long-chain omega‑3 fatty acids, eicosapentaenoic acid (EPA) and docosahexaenoic acid (DHA). DHA...
Stress, Simplified
There’s no shortage of tips, lists, and suggestions available from trusted friends, family members, spiritual leaders, television...
Autoimmunity and Natural Health Products
“Autoimmunity” refers to a category of health conditions characterized by the immune system inappropriately attacking the...
Natural Nootropics—Because We Could All Use a Boost!
When it comes to energy levels mood, memory and concentration, we all seem to have good days and bad days. But when the bad days seem to...
Autoimmune Health—Top 3 Supplements to Restore Immune Function
A healthy immune system is self-recognizing—it can recognize healthy cells as “self” and foreign cells as “nonself.”...
Fish Oil for Physical Fitness: The Next Best Workout Partner
What supplements do you take to support your fitness goals? Talk to any athlete or visit your favorite fitness website, and you’ll get a...
Get in the Game! Tips to Sideline Arthritis Pain
Every spring, my weakness for being the “patron saint” of vintage bicycles kicks in. While cycling through the neighbourhood, I...
Seasonal Affective Disorder: “Beating the Winter Blues”
Late fall and winter can be a mentally challenging time of year for many Canadians: The weather gets colder, the days get shorter, and people spend...
Subscribe to our Newsletter ! Never, Maybe Later Subscribe
Your subscription to New Roots Herbal could not be saved. Please try again.
Your subscription to New Roots Herbal has been successful.