Hitting the hay, sawing logs, catching ZZZs—these are terms we use to describe sleep, but what is happening is more like a well-timed orchestra’s performance. Areas of the brain work in concert; some turn on and some turn off, directed by cues from light and chemical messengers called neurotransmitters. However, recent research suggests that sleep is not a process confined to the brain but that can receive input from the entire body, most prominently through the immune system.

The fact that sleep deprivation is associated with increased risk of high blood pressure, obesity, diabetes, depression, and early death is the first clue that sleep is a process directed by the entire body.[1] The role of the immune system is suggested by research revealing that not sleeping makes you sick and, conversely, being sick causes you to feel tired and sleep. Invading pathogens like viruses, bacteria, or fungal species carry markers that activate the immune system and begin a cascade of chemical messengers, especially cytokines, that increase the need for sleep, promote fatigue, and decrease sleep quality. It turns out that this is true for acute and chronic infections.

Other health conditions interact with sleep via the immune system. Narcolepsy, for example, has been suggested to be an autoimmune disease, as it is strongly correlated with a genetic variant implicated in many autoimmune conditions. Sleep apnea has also been identified with immune activation, displaying higher levels of the chemical messengers’ cytokines. 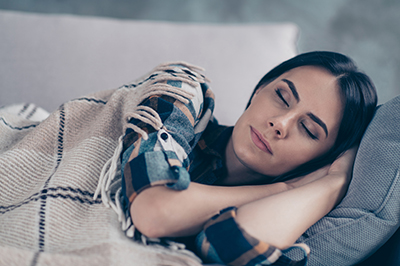 It is estimated that 25% of Canadians are dissatisfied with their sleep. Conventionally, this is managed with prescription medications that address isolated symptoms, but also may cause undesirable side effects and worsen insomnia. Recent research has begun to reveal that changes in sleep may be a consequence of imbalances in the immune system. Even disruptions in healthy sleep patterns can activate the immune system. Chronically shortened or interrupted sleep, known as fragmented sleep, can induce changes in the cardiovascular and metabolic systems as well as alter the microbial balance of the intestines. These changes create oxidative stress, a condition in which there is an excess of reactive, charged particles that attack cell membranes, proteins, and DNA. Oxidative stress, in turn, activates the immune system.[2] While discrete health conditions, like diabetes or infection, can alter sleep through the immune system, the immune triggers associated with oxidative stress, cytokine production, and immune-activating markers can be produced in response to exposures of everyday life such as food, psychological stress, and environmental toxins.[3]

From the Immune System to the Brain

The brain protects itself from chaos in the rest of the body by carefully arranged cells. This defence is known as the blood-brain barrier. The chemical messengers produced by an activated immune system as well as oxidative stress can compromise the integrity of this barrier, allowing cells that do not normally have access to the brain, such as immune cells, to cross the barrier. A few areas of the brain are not protected by this barrier and can be directly attacked. One such structure is the pineal gland, which produces melatonin, the hormone responsible for regulating the body’s sleep clock. Interestingly, melatonin has recently been revealed as an important player in many immune-related functions.[4][5] Some immune cells have also demonstrated an ability to cross an intact blood-brain barrier under the influence of injury, inflammation, or disease.[6] To make matters worse, loss of sleep may further compromise the function of the blood-brain barrier and make it more permeable to invasive substances.[7] Once inside the brain, components of the immune system impact the brain’s communication network and trigger the brain’s own immune network.

Neurotransmitters are the chemical messengers the nervous system uses to communicate. They are part of the orchestra that links different parts of the brain to produce sleep and regulate many other functions including mood. Two of the neurotransmitters involved in sleep, that tend to have a calming effect and help make melatonin, are serotonin and tryptophan. Both cytokines of the immune system and oxidative stress have been identified to decrease available levels of serotonin and to shunt tryptophan away from its normal neurotransmitter pathway to make a brain-toxic chemical instead.[8] Glutamate and dopamine are two additional neurotransmitters that, in excess, have an excitable effect. Activated immune cells can impact dopamine levels, increase glutamate, and create anxiety that disrupts sleep.[9]

When inflammation or oxidative stress activates the brain’s own immune network, it enters a delicate dance with sleep patterns. Inflammatory processes in the brain occur through two types of cells unique to the brain, astrocytes and microglia, responsible among other functions for repairing and maintaining nerve cells. Astrocytes are also directly involved in sleep processes. A body of research has studied how these special cells behave when activated by sleep deprivation, oxidative stress, and immune chemical messengers’ cytokines. 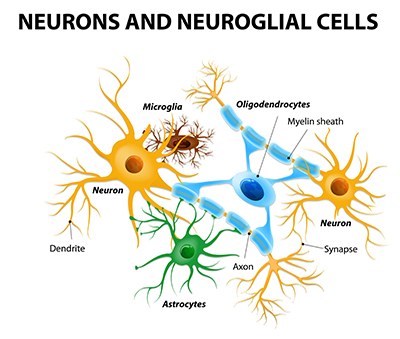 In the presence of these triggers, brain cells generate excess waste and undergo changes in their cell surfaces that place an extra “clean-up” burden on microglia and astrocytes. Brain clean-up is accomplished through a process called phagocytosis. Usually, phagocytosis is intended to eliminate waste products, but under the influence of inflammation-promoting triggers, microglia and astrocytes begin to phagocytose parts of nerve cells; another way of saying this is that the brain begins to eat itself. Although this may be the body’s attempt to repair worn nerve cells, the self-destruction has consequences. In the mouse brain, microglia activated by only 24 hours of sleep loss caused deficits in learning and memory that lasted at least seven days. Activation of astrocytes by acute and chronic sleep loss has also been correlated with cognitive decline.[10][11][12] Over the long term, both sleep loss and activation of brain immune cells may lead to neurodegenerative disorders such as Parkinson’s and Alzheimer’s diseases.[13] This is due to disruption of neurotransmitter production, immune-cell activation, and a resulting inability of the body to clean up brain waste.

Brain inflammation is also self-perpetuating. Activated brain immune cells produce their own inflammation-promoting cytokines and reactive particles, worsening the cycle of inflammatory triggered brain inflammation. If activation of these cells—namely microglia—continues, it may cause the brain to be more vulnerable to other types of damage and promote ongoing nerve-cell injury.[14]

Instead of being a discrete condition, sleep disruption may be related to a wide variety of underlying conditions. Thus, when working with a naturopathic doctor to improve sleep, it is important to address underlying health conditions, reduce inflammation, and identify sources of oxidative stress in daily life; and perhaps the answer to improving sleep lies in the immune system. 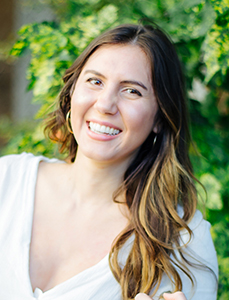