The human gastrointestinal tract (GIT) alone contains 1014 microorganisms including bacteria, viruses, and fungi.[1] That’s approximately 100 times more microbial cells than human cells, which shows how much of an impact they can have on human health.[2]

The term to describe the range of microorganisms found in an environment is “microbiota.”[3] The environment in which the organisms live—in this case the human GIT—is termed “microbiome.”[4] Humans and microorganisms have evolved together over time, forming a symbiotic and mutually beneficial relationship.[5] Some of the benefits conferred by gut microbiota include maintaining the integrity of the mucosal barrier of the GIT, vitamin and nutrient production, and immune-system regulation.[6] There is an optimal balance working in the GIT: Disruption of this balance can result in a host of symptoms, as certain microorganisms can have detrimental effects on the body and can contribute to disease.[7] This is termed “dysbiosis.”[8]

Diseases Impacted by Dysbiosis of the Gut

Inflammatory bowel disease (IBD) is an umbrella term for two diseases: Chron’s disease and ulcerative colitis. Both are conditions in which inflammation results in damage to the intestinal tract, resulting in abdominal pain, nutrient deficiencies, and systemic illness. Dysbiosis is a cause and an outcome of IBD.[9]

In IBD, the immune system is overly aggressive within the digestive tract, resulting in inflammation. The immune system also attacks certain microorganisms, as it has been observed that there is a diminished microbial diversity in those with IBD.[10] Protective organisms, such as Bifidobacterium and Clostridium species, are reduced, while destructive species, like Proteobacteria and certain strains of Escherichia coli, are increased.[11] These destructive species further promote inflammation and activate disease-triggering immune responses.[12]

The brain-gut-microbiota axis is bidirectional.[13] The brain communicates with the gut, and the microbes in the gut can communicate with the brain.[14] The central route of communication is implicated through the vagus nerve, which directly connects the GIT to the brain.[15] Inflammation is one of the hallmarks of depression and can alter the function of the gut barrier, leading to changes in gut bacteria.[16] Patients with depression notably have a different microbiota with reduced levels of health-promoting bacteria than nondepressive individuals.[17] This dysbiosis further contributes to the symptoms of depression, as the bacteria that is communicating with the brain is proinflammatory,[18] and the cycle continues. 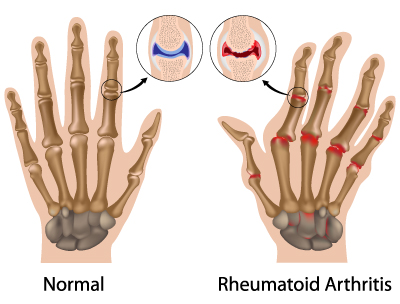 Rheumatoid arthritis is an autoimmune condition, meaning the immune system is attacking self-cells, specifically within the joints.[19] It is proposed that, since autoimmune markers such as rheumatoid factor and anticitrullinated protein antibodies are present in the blood well before joint inflammation occurs, the autoimmunity may stem from sites such as the GIT or airway mucosa.[20] The disproportionate inflammatory response has been shown to be triggered by dysbiosis in the gut, as certain bacteria activate autoreactive immune cells.[21]

Type 1 diabetes is an autoimmune condition that results in destruction of the beta cells of the pancreas. This results in no insulin release and, consequently, impaired glucose regulation. Usually, the disease presents in childhood. As shown in rheumatoid arthritis, the gut bacteria are able to affect the immune system. Certain bacteria contain an endotoxin called lipopolysaccharide (LPS) which stimulates the inflammatory response and impairs pancreatic beta-cell function.[22] Some studies have shown that people with type 1 diabetes have more circulating LPS than nondiabetic individuals.[23]

LPS can also damage the intestinal mucosa, leading to more inflammation and increase in exposure to environmental antigens triggering the already reactive immune system.[24] In type 1 diabetes, gut diversity and stability are reduced compared to nondiabetic individuals.[25] The low diversity has been proposed to limit the ability to digest diverse diets, which further leads to diminished microbiota contributing to disease.[26]

A Naturopathic Approach to Gut Dysbiosis

In terms of the above conditions, probiotics are an appropriate choice of therapy to mitigate symptoms related to dysbiosis. Before taking probiotics, however, it is important to speak with a health-care practitioner like a naturopathic doctor, as not all probiotics work the same.

In the treatment of ulcerative colitis, traditional probiotics play a limited role, but the specific strain E. coli Nissle and other proprietary strains have been shown to maintain remission and reduce inflammation.[27] Other strain-specific probiotics that are optimal choices for IBD are F. prausnitzii which protects the gut, maintains the gut barrier, and stimulates the protective aspect of the immune system.[28]

To reduce the effects of dysbiosis in depression, psychobiotics, which are a family of probiotics that have a positive effect on mental health, can be utilized.[29] Psychobiotics have also expanded to include prebiotics, which are soluble dietary fibres that feed the gut bacteria.[30] In studies using psychobiotics such as FOS and BGOS (prebiotics), participants showed decreased waking cortisol, which is the stress hormone that is a marker for anxiety and depression.[31] Further, specific strains, such as Bifidobacterium longum, decreased morning cortisol and subjective levels of anxiety as well as increasing cognitive functioning.[32] 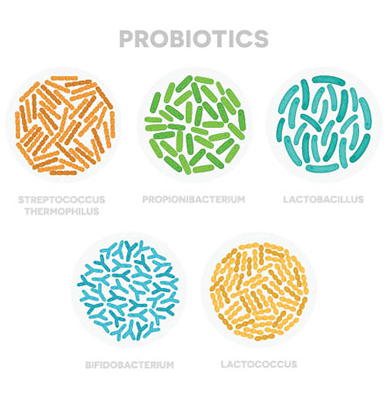 Probiotics have a wide safety profile for rheumatoid arthritis.[33] Their effect on reducing some proinflammatory cytokines of the immune system like IL‑6 has been proven, but not other markers of inflammation or pain.[34] It seems that diets rich in probiotics—like fermented foods, dietary fibres, and a variety of vegetables—have stronger evidence for reducing pain than probiotics taken as a supplement.[35]

There is strong evidence that dysbiosis is present in autoimmune diseases like rheumatoid arthritis, and probiotics help to restore healthy mucosal barrier function and reduce impact of harmful bacteria.[36]

However, autoimmune conditions are multifactorial, and other aspects of the disease need to be addressed. In combination with other treatments like lifestyle, diet, botanicals, and hormone regulation, probiotics can also add to treatment success.

Like other autoimmune conditions, individuals with type 1 diabetes mellitus have a compromised mucosal barrier.[37] The research for strain-specific or multistrain probiotics to treat the diabetes is limited; however, probiotics can restore the intestinal barrier and can restore bacterial balance. Dietary factors, such as prebiotics and complex carbohydrates, are fermented by gut bacteria which produce a short-chain fatty acid called butyrate.[38] Butyrate helps to maintain gut integrity and reduce intestinal permeability, and it is anti-inflammatory; all important in treating autoimmune conditions.[39]

Finally, there is some evidence which supports gluten-free eating.[40] Celiac disease, another autoimmune condition in which an individual creates autoantibodies against gluten, has been linked with other autoimmune conditions.[41] A gluten-free diet in those with type 1 diabetes can reduce immune burden and can theoretically prevent celiac disease from being triggered.[42] 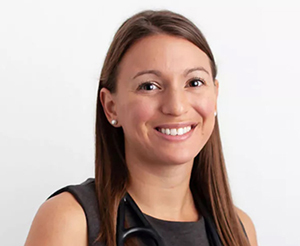 She seeks to empower patients with quality care so they can live to their highest potential. Her mission is to provide individualized health-care that serves every need and desire, and puts no limits on what you can achieve.