St. John’s wort (Hypericum perforatum) is one of the oldest and most investigated herbs used; it is a perennial with abundant yellow flowers, best known for its antidepressant, anxiolytic, antiviral, antibacterial, antiinflammatory, and analgesic properties.[1] St. John’s wort is so named because it flowers in the midsummer, around St. John’s-the-Baptist’s Day on June 24.[2] It grows widely in Europe and North America. Earliest reports of medicinal use of this herb date from the early Greeks and Romans in the first century CE, as well as later on by Paracelsus around 1500 CE.[2] In modern times, St. John’s wort has been extensively studied for its antidepressant effects.

St. John’s wort has been shown to contain several classes of chemical constituents, including naphthodianthrones, xanthones, flavonoids, phloroglucinols (e.g. hyperforin), and hypericin.[3] Of these, hyperforin and hypericin are thought to be mostly responsible for its medicinal effects.[1]

The analysis concluded that St. John’s wort extracts are:

Given that Cochrane is generally quite conservative in its conclusions regarding the treatments reviewed, these results are noteworthy to be sure.

In addition to mood-regulating effects, St. John’s wort and its compounds have demonstrated a range of intriguing activities, including antiinflammatory effects, neurological effects, and even possibly anticancer effects:

Traditionally, St. John’s wort has also been used topically for its antiinflammatory, antibacterial, and analgesic effects for various kinds of external wounds and traumas.[12] St. John’s wort is traditionally used internally for urinary tract infections, digestive infections such as infectious diarrhea, as well as injuries of the nervous system including concussions.[12]

St. John’s wort may interact with a number of medications, including selective serotonin reuptake inhibitors (SSRIs) and other antidepressants, cardiovascular medications such as warfarin and digoxin, oral contraceptives, anticonvulsants, triptans, immunosuppressants such as cyclosporin, theophylline, HIV protease inhibitors, and anticancer agents.[13][14] The hyperforin content in St. John’s wort is thought to be responsible for these interactions through induction of the CYPP450 enzymes and p-glycoprotein drug efflux pump.[14] 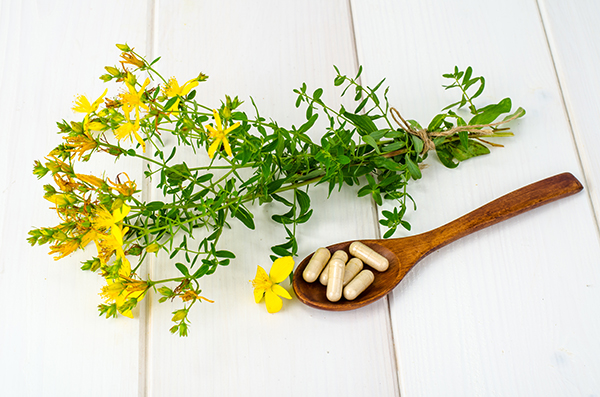 St. John’s wort is an herb with a long history of use and good depth of scientific research. It has been shown to be effective for mild to moderate depression. Evidence suggests its effectiveness is similar to that of pharmaceutical antidepressants. Additional effects include antiviral and antibacterial effects, antiinflammatory effects, and possible effects on cognition. Due to potential interactions with many medications, individuals should consult a licensed health-care practitioner prior to use, in order to determine whether St. John’s wort is an appropriate treatment strategy for them.

A perennial flowering plant native to western Asia and Europe, St. John’s wort (Hypericum perforatum) is rich in history for a broad range of folkloric uses. Its contemporary therapeutic n...