For thirty years, the results of scientific studies on the conservation of probiotic strains have underscored the obvious: Refrigeration is a key factor for the survival for these friendly—and fragile—bacteria.[1] While some probiotic strains are relatively stronger than others (Bifidobacteria are even less resistant than Lactobacilli), the fact remains that sensitivity to temperature and humidity is a constant concern for the durability of probiotics.[2], [3] Another sine qua non condition for the survival of probiotics is protection against gastric acidity.[4] But let’s focus here on the issue of refrigeration. To simply illustrate this issue, here are some study conclusions validating the importance of probiotic refrigeration.

According to a study, the survival of L. paracasei NFBC 338 and L. salivarius UCC 118 strains during storage was inversely proportional to storage temperature, being as low as 11% and 2%, respectively, after two months of storage at 15 °C.[9] Another study, done on Lactobacillus delbrueckii spp. bulgaricus, showed high mortality rates at room temperature, while at 4 °C, survival was higher.[10] 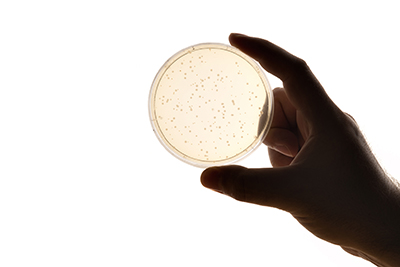 Recently, New Roots Herbal commissioned an ISO 17025–accredited analytical laboratory to perform a stability comparison between a refrigerated product from its probiotics line and a competing nonrefrigerated product. Both products had identical expiration dates, and a remaining conservation duration of 18 months. Knowing that Health Canada labeling allows 24 months for preservation duration on probiotics, six months had therefore elapsed since their manufacture. On the first day of the test, the unrefrigerated competitor’s probiotic already contained only 73% of the amount of colony-forming units (CFUs) claimed on the label; after 60 days (i.e. 16 months before its expiration date) at room temperature between 19 °C and 25 °C, the amount had fallen to only 40% of alleged CFUs. In comparison, after 60 days of storage in a refrigerator at a temperature between 2 °C and 8 °C, New Roots Herbal’s product still contained 110% of the declared number of UFC on the label.[11] 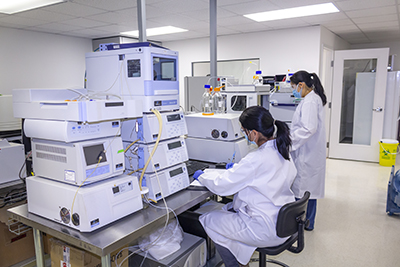 The Brief on Effective Probiotics

So, next time you visit to a health-food store, rather than ask the question “to be or not to be refrigerated?” simply ask: “Where is the fridge?”

Another critical factor for choosing effective probiotics is their delivery. Join us next issue for a complete review showing how enteric-coating capsules protect probiotic strains from strong gastric acid. 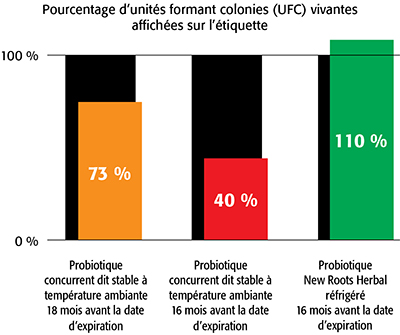 [2]       Kailasapathy, K., and J. Chin. “Survival and therapeutic potential of probiotic organisms with reference to Lactobacillus acidophilus and Bifidobacterium spp.” Immunology and Cell Biology, Vol. 78, No. 1 (2000): 80–88.

The Chill Factor
Related Articles
Health
Top 10 Ways to Give your New Year an Energy Boost
Health
Difficulty Managing Your Weight? It May be Your Slow Metabolism (Part 2)
Health
A Nutritionist’s Advice for a Healthy Holiday
Categories
Health Recipes Lifestyle & Wellness Naturopathic Currents
Subscribe to our Newsletter ! Never, Maybe Later Subscribe
Your subscription to New Roots Herbal could not be saved. Please try again.
Your subscription to New Roots Herbal has been successful.