The standard North American diet tends to weigh in heavily with refined carbohydrates and sugars, as is widely known. Many people try to improve the protein content of their diet through supplementation with protein powder. At the same time, increasing numbers of people are choosing vegetarian or vegan diets. While there are many health benefits to these diets—for example, if done properly, they are high in fruits, vegetables, and legumes, and may reduce risk of ischemic heart disease, cancer, and other forms of chronic disease [1][2]—at the same time, common pitfalls and nutrient deficiencies may arise. One of these is protein deficiency, as well as that of iron, vitamin B12, zinc, vitamin D, and omega-3 fatty acids.[2][3]

Lupine seed is a high-quality, plant-derived protein source, ideal for vegetarians or vegans as well as others seeking to boost their protein intake. Although not well-known, lupines are legumes (beans), and the lupine family includes white lupine (Lupineus albus), yellow lupine (L. luteus) and narrow-leafed lupine (L. angustifolius).[4] The lupines are native European legumes that, according to a 2015 review, represent “a significant alternative to soya bean.”[4] Their seed protein content is high (up to 44%) and they represent a sustainably grown crop.[4]

In addition to its role as a protein source, lupine contains other constituents that have been the subject of investigation for their health benefits. The γ‑conglutin protein fraction has been investigated for its potential effects in controlling insulin resistance and diabetes; lupine seeds are rich in the iron-containing protein ferritin; lupine protein is also thought to have possible effects on inflammation, regulation of the gut microbiome, and other metabolic parameters such as lipids and blood pressure.[4]

Another RCT evaluated the effect of 25 g lupine kernel fibre compared to citrus fibre or a low-fibre diet for four weeks.[6] Lupine fibre resulted in a 9% reduction to total cholesterol, 12% reduction in LDL, and 10% reduction in triglycerides compared to citrus fibre. Interestingly, lupine fibre was also associated with reduced high-sensitivity C‑reactive protein, a marker of inflammation, and reduced systolic blood pressure when compared with baseline values.

However, SCFAs are also taken up into the circulation and are used by various organs including the liver.[7] Similar results on cholesterol were found by a third study.[8] 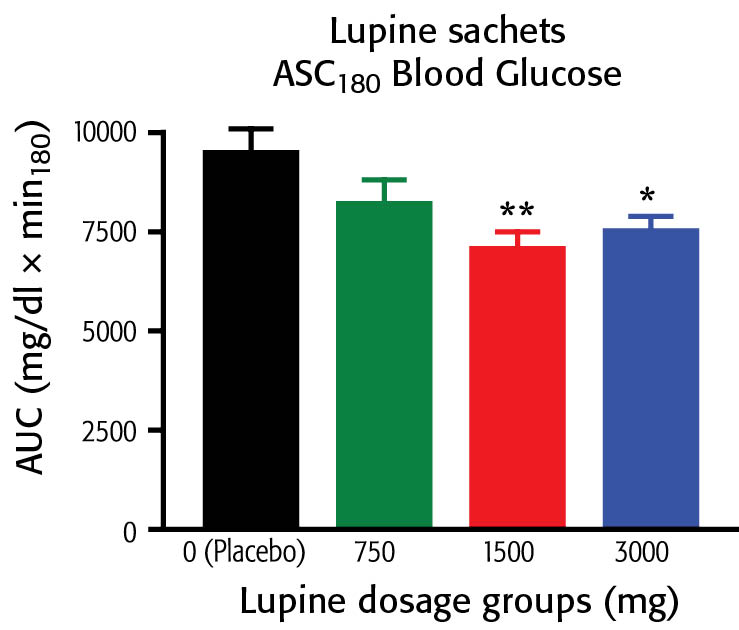 Another RCT in 24 patients with diabetes assessed the effect of lupine flour (containing 12.5 g lupine fibre plus 22 g lupine protein) on glucose control when consuming a drink containing 50 g glucose, compared to:

After the glucose drink, blood glucose was significantly lower in both the lupine and the soy groups compared to the control group. Insulin and C‑peptide levels were also higher for lupine and soya compared to control.[10]

Finally, an RCT evaluated the effects of lupine in 88 overweight and obese patients.[11] Participants were randomly assigned to replace 15–20% of their usual daily energy intake with white bread (control) or lupine kernel flour–enriched bread (lupine). For the lupine group, there was a small but significant reduction in systolic blood pressure (−3.0 mmHg), and reduction in pulse pressure (−3.5 mmHg).

Overall, the evidence summarized here indicates that there is a need for high-quality, plant-derived protein supplementation among large numbers of the population. Lupine seed contains all nine essential amino acids, and is relatively high in iron; in addition, lupine is a sustainable protein source. Lupine-seed protein supplementation has been shown to benefit cholesterol, blood glucose control, and blood pressure, and may also have anti‑inflammatory effects as well as beneficial effects on the gut flora and production of short-chain fatty acids.

Well-known in the community as a naturopathic doctor, associate professor, and editor-in-chief of Integrated Healthcare Practitioners.

A practicing naturopathic doctor since 2007, her areas of focus include women's health, children's health, chronic pain, and more.

Non‑GMO lupine seed powder is a dynamic and versatile superfood packed with protein, fibre, iron, and potassium. This is a good way for vegans, vegetarians, and those looking to limit their...