Much has been said about the saga of omega‑3 fatty acids, but better said twice than just once. Uncertainty persists regarding the true value of omega‑3 and ‑6 fatty acids, but also because we’re often deficient in essential polyunsaturated fatty acids (PUFAs). This article outlines the metabolism of PUFAs and, keeping in step with the theme of this magazine, some of the beneficial aspects of omega‑3 for conception and mothers.

PUFAs are called “unsaturated” because they can capture electrons, giving them antioxidant properties. Components of cell membranes and energy sources, PUFAs also contribute to proper gene regulation. Therefore, to stay healthy, our bodies need to take in two essential PUFAs (which the body is unable to produce): linoleic acid (LA) omega‑6 and alpha‑linolenic acid (ALA) omega‑3. Once in the cell membranes, these precursors are transformed into about twenty PUFA derivatives, having longer chains and being necessary for our vehicle’s proper functioning. Let’s talk a little more about metabolism to better understand these omega fatty acids.

Linoleic acid, the leading omega‑6, is beneficial when it comes from sunflower, safflower, corn, and sesame oils, as well as from quality eggs and dairy or wild-game meat (which contain five times more PUFAs than farm-raised animals). Linoleic acid mainly generates gamma‑linoleic acid (GLA, also found in evening primrose and borage oils), which in turn produces dihomo-gamma‑linolenic acid (DGLA, for which the sole food source is breast milk) and prostaglandins of types 1 (PG1) and 2 (PG2). These compounds are beneficial for the nervous system, cell membranes, and intestinal and respiratory mucous membranes. 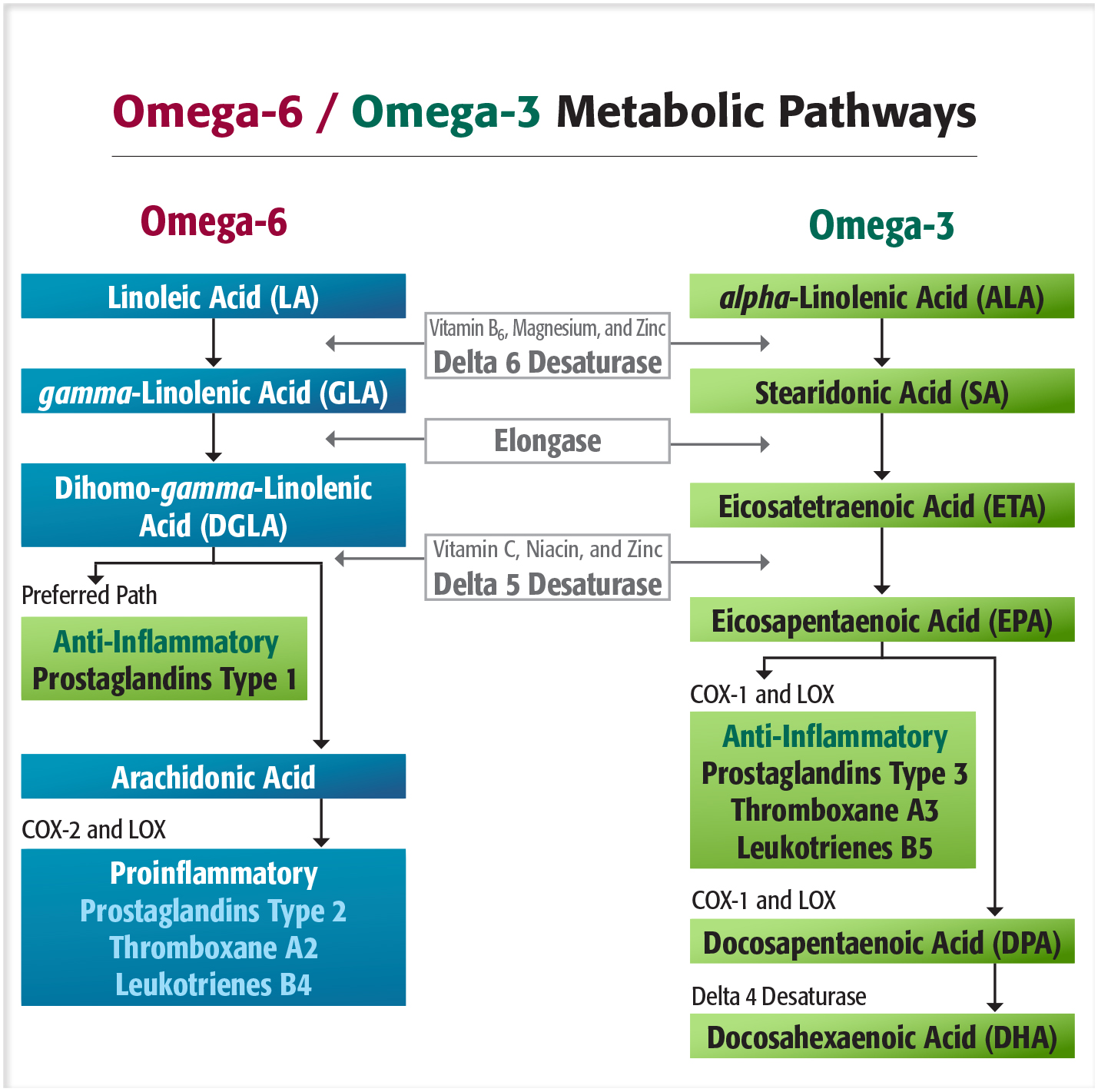 Only 15% of this “quality” linoleic acid is converted into arachidonic acid. On the other hand, the omega‑6 found in common meats, dairy products, and cold cuts (of which average consumption exceeds our needs) provides an almost exclusive supply of arachidonic acid, responsible for the overproduction of type 2 prostaglandins (PG2), which cause inflammation. But relax, prostaglandins do have their benefits! In small amounts, type 2 prostaglandins are useful (Figure 2), for example for healing open wounds, for mediating allergic reactions, and for dilating the cervix during childbirth. Excessive intake of arachidonic acid, though, causes and maintains long-term inflammatory and allergic reactions, notably by way of the catalytic enzyme proinflammatory COX‑2, involved in pathological states of the nervous system or bone, rheumatoid arthritis, colon cancer, angiogenesis, and kidney failure. Omega‑6s are not to be demonized; you should just keep in mind that their origin and quantity define their dangerousness.

alpha‑Linolenic acid (ALA) is the other essential PUFA, and is found in walnut, soy, canola and flaxseed oils, chia seeds, as well as—in small amounts—in cold-water fish (mackerel, sardines, anchovies, halibut, salmon), which contain more eicosapentaenoic acid (EPA) and docosahexaenoic acid (DHA) omega‑3s. The body, if healthy and being supplied with cofactors (vitamins B6, B3, and C; zinc; magnesium; and manganese), knows how to transform ALA into EPA and DHA, omega‑3s with longer carbon chains and precursors of anti-inflammatory PG3. Nevertheless, this bioconversion of ALA is often neither very effective nor significant. Age, diet, hygiene, stress, pollution, diseases, etc. change the body’s ability to properly metabolize omega fatty acids, especially by affecting the delta 6 desaturase enzyme (Figure 1). It should be noted that trans fats derived from modified PUFAs (margarine, shortening, hydrogenated oils, etc.) strongly affect this enzyme, whose function is to transform LA and ALA fatty acid derivatives first, and then to regulate the enzymatic kinetics of their respective metabolic pathways. Delta 6 desaturase naturally begins decreasing around age 45, hence the need for seniors to directly supplement with EPA and DHA omega‑3s, as well as borage or evening primrose oil, which is rich in GLA. Furthermore, the delta 5 desaturase enzyme prefers the metabolic omega‑3 pathway rather than the conversion of arachidonic acid into DGLA on the omega‑6 side. Therefore, prioritizing food sources or supplements of ALA, GLA, and EPA and DHA omega‑3s increases the production of type 1 prostaglandins (from omega‑6 fatty acids) and type 3 (from omega‑3 fatty acids), both particularly beneficial (Figure 1). These act against cellular degeneration and inflammation; modulate the action of the macrophages of the immune system against allergies, asthma, eczema, and autoimmune diseases; inhibit platelet aggregation, thus preventing thrombosis, myocardial infarction, or pulmonary embolism; or relax smooth, vascular, uterine, and lung muscles.

It’s All About Balance 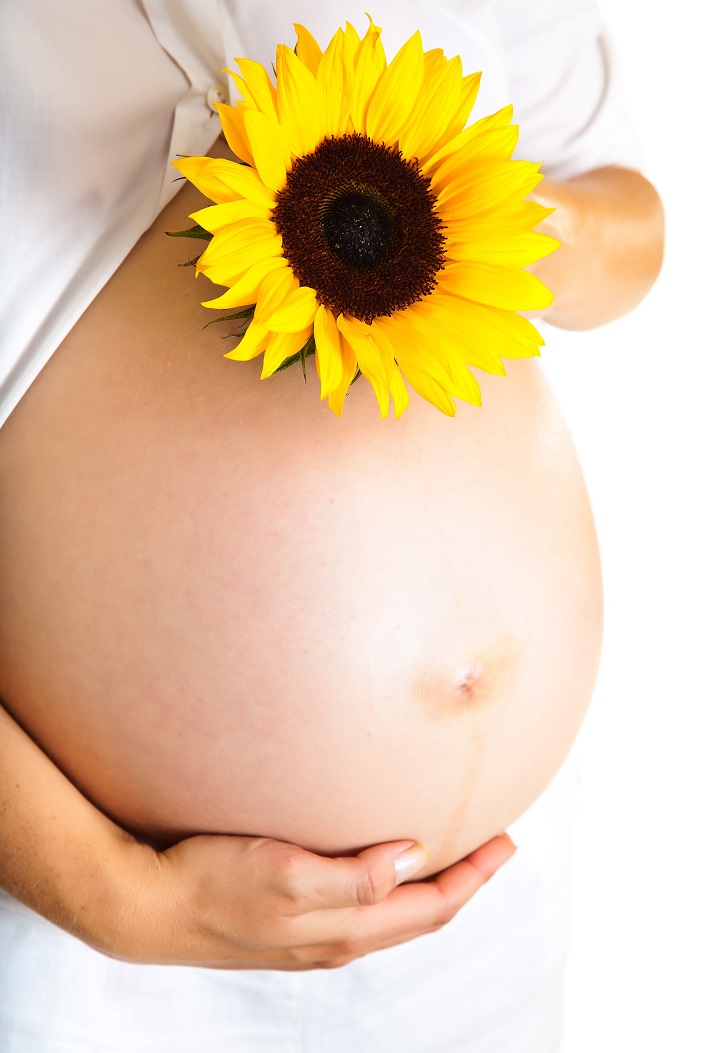 ​according to sources, while the ratio should not exceed 5 or 6 to 1. This imbalance does not necessarily come from a diet rich in plant-based omega‑6, but rather from the excess of animal-based omega‑6 that competes with our own use of omega‑3 and disrupts the ideal PG2/PG1 physiological ratio. PG1 deficiency, which is very common, is part of the clinical picture of various diseases (CVD, PMS, skin diseases, inflammatory diseases, multiple sclerosis, schizophrenia, etc.) listed in 1983 by Judy Graham, who made evening primrose oil famous as a natural anti-inflammatory. It’s therefore important to provide the body a proper balance of fatty acids; for example, cardiovascular balance requires a precise ratio of PG2 to PG3. Omega‑6–based PG2s are vasoconstrictor and promote platelet aggregation to stop hemorrhaging, and PG3s are vasodilatory and fluidifying. Homeostasis, in this case, cannot save one any of these complementary compounds. You will understand that privileging an omega at the expense of another would also be a mistake, because they need the same enzymes; so, an excess of one prevents optimal use of the other.

Therefore, to optimize your omega‑6/omega‑3 ratio—and consequently improve the metabolism of prostaglandins to fight inflammation and oxidative stress—you should reduce saturated fatty acid and PUFA intake from animal sources (in particular arachidonic acid), in favour of omega‑3s (ALA, EPA, and DHA) and GLA omega‑6. For example, reducing the omega‑6/omega‑3 ratio from 10:1 to 4:1 in patients with cardiovascular disorders brings a 70% reduction in the mortality rate. On another level, men whose sperm quality is impaired have an omega‑6/omega‑3 ratio that is too high. Also, motility, concentration, and normal morphology of spermatozoids depend heavily on DHA.

Science and nature are not always accurate, and the efficiency of physiological processes of the body never reaches 100%. As we have seen, about 25% of ALA is catabolized as CO2 to produce energy, and therefore will not be available for producing EPA and DHA omega‑3s. Also, in women, only 20% of ALA is converted into EPA, and 9% into DHA. Although these figures vary according to each person’s biochemical individuality, they show the importance of supplementing with EPA and DHA omega‑3s. For fertility, pregnancy, and breastfeeding, omega‑3 fatty acids are great nutrients, as are probiotics and vitamin D3, which promote vascular development of the endometrium and intrauterine blood flow; and reduce the risk of miscarriage, premature delivery, and complications. Indeed, omega‑3 decreases placenta PG2 through EPA and ADH omega‑3 derivatives including, among others, recently discovered resolvin and protectin anti-inflammatories (Figure 2 and Figure 3). 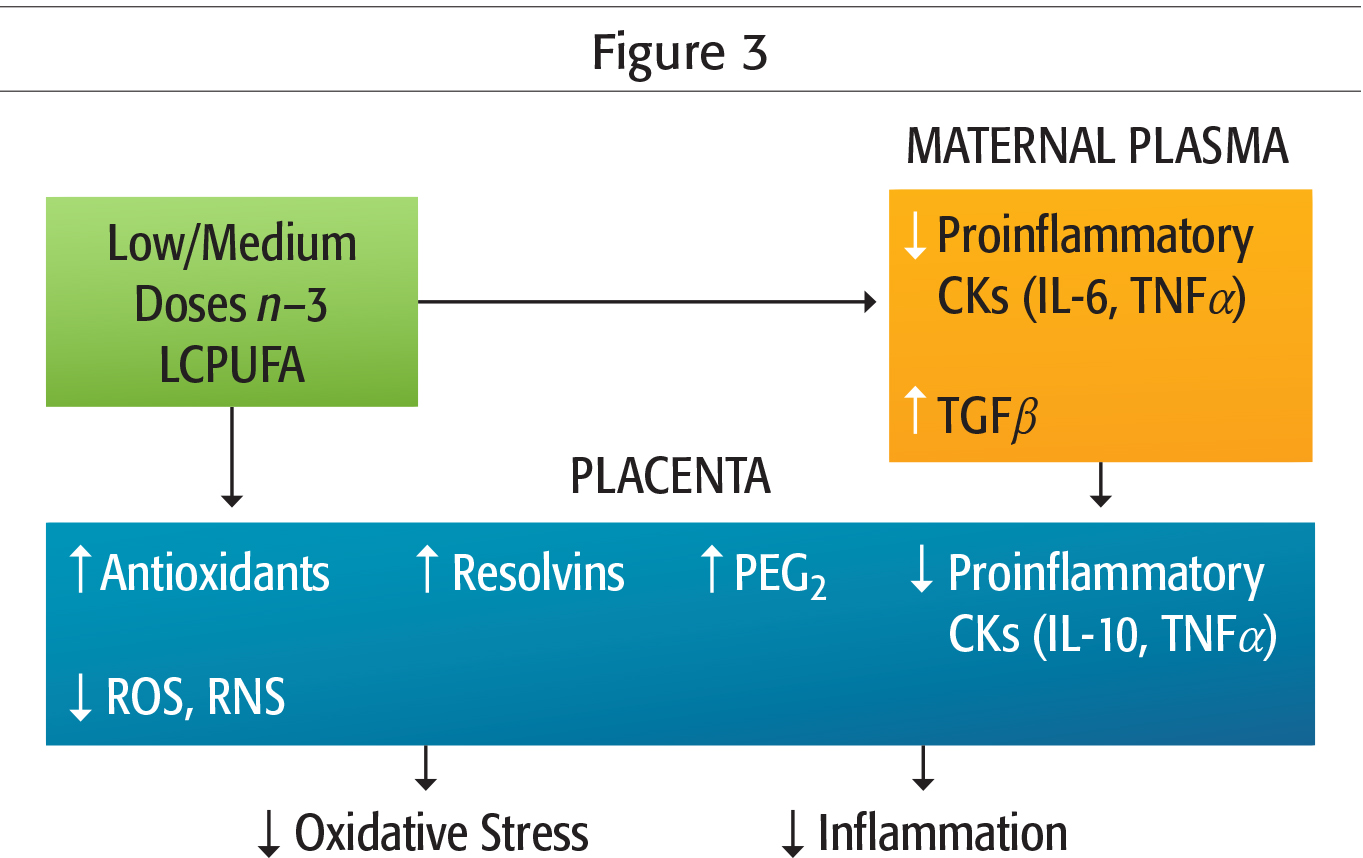 In addition, optimizing the omega‑6/omega‑3 ratio reduces the effects of Th17, a type of the mother’s immune cells which are essential for fighting bacterial and fungal infections, but potentially dangerous for fetal brain development. In case of infection or immune-system activation in the mother, these Th17 are activated by interleukin 6 (IL‑6, a pro‑inflammatory cytokine) from the macrophages and T killer cells. Th17 then generates IL‑17 that travel through the placenta to the foetus’ brain, where they increase the number of IL‑17 receptors, which are correlated with birth defects, autoimmune diseases, and autism symptoms. Omega‑3s, especially EPA, can also get rid of postpartum blues naturally.

Clearly, omega‑3 fatty acids are beneficial to health in general, and specially to pregnancy. This assertion may nevertheless lead to excessive supplementation, which may have undesirable effects on the foetus and the baby’s future development. Too much is not necessarily better, and to avoid this potential food toxicity of saturated fatty acids—of both omega‑6 and omega‑3—eating and supplementing need to be well-considered and balanced.

So, for the sake of taste and health, don’t abandon your buttered bread (too unfairly discredited), but diversify your unrefined oils and cook with them intelligently (and be careful, because they don’t all tolerate cooking). Be sure to eat various sources of fat (fish, avocados, nuts…), and supplement as needed and preventatively with omega‑3 or high-quality GLA, at a reasonable dose. Do seek the recommendations of an authorized health-care practitioner or naturopath. Health tips in this article do not in any way substitute a prescription.