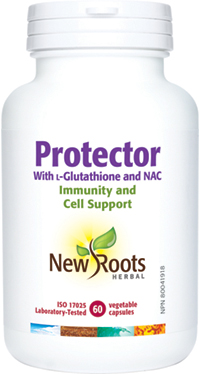 With ʟ‑Glutathione and NAC
Immunity and Cell Support
Non GMO

New Roots Herbal’s Protector is unique among antioxidant formulas in its ability to be a highly effective therapeutic agent for a number of conditions such as pollution as well as liver and disease protection.

Protector is a multiantioxidant formula that contain metabolic nutraceuticals for ultimate antioxidant protection.

Glutathione is a substance in our cells which is predictive of how long we will live. There are very few other factors which are as predictive of our life expectancy as is our level of cellular glutathione. Glutathione has been called the “master antioxidant,” and regulates the actions of lesser antioxidants such as vitamin C and vitamin E within the body; without glutathione, vitamins C and E cannot adequately protect your body against disease. Glutathione regulates and regenerates immune cells and is the most valuable detoxifying agent in the human body. Low levels are associated with hepatic dysfunction, immune dysfunction, cardiac disease, premature aging, and death.

Glutathione (ʟ‑gamma‑glutamyl-ʟ‑cysteinylglycine) is a tripeptide of the amino acids cysteine, glycine, and glutamic acid. Glutathione is an antioxidant compound found in living animal and plant tissue. It takes up and gives off hydrogen, and is important in cellular respiration. A deficiency of glutathione can cause hemolysis (destruction of red blood cells, leading to anemia) and oxidative stress (toxic free-radical cell damage). Glutathione is essential in intermediary metabolism as a donor of sulfhydryl groups, which are essential for the detoxification of acetaminophen.

Selenium is a structual compound and a cofactor for the antioxidant enzyme glutathion peroxidase.

N‑Acetyl-ʟ‑cysteine) is a major precursor of glutathione. NAC provides important protection against toxins and free radicals, and is able to strengthen the immune system. NAC is an acetylated form of the amino acid cysteine, which is more efficiently absorbed. It is also an antioxidant that is helpful in fighting viruses. It is commonly used to help break down mucus and to protect from acetaminophen toxicity. Importantly in this formula, it aids the body to synthesize glutathione.

When taking N‑acetylcysteine or glutathione, it is recommended that vitamin C be taken at the same time to prevent these amino acids from being oxidized in the body. Ascorbate acid (vitamin C) is a nutrient essential for maintaining antioxidant protection and liver support. Vitamin C also works along with antioxidant enzymes catalase and superoxide dismutase. It is responsible for regenerating oxidized vitamin E in the body, thus potentiating the antioxidant benefits of vitamin E.

From a therapeutic viewpoint, therapeutic antioxidants should fulfill several criteria including absorption and conversion in cells and tissues into usable form. Antioxidant actions (including interactions with other antioxidants) are important in both membrane and aqueous phases, and must have low toxicity. New Roots Herbal’s Protector is unique among antioxidant formulas in its ability to be a highly effective therapeutic agent for a number of conditions in which oxidative damage has been implicated.

Adults: Take 1–2 capsules daily or as directed by your health-care practitioner.

Cautions and warnings: Consult a health-care practitioner prior to use if you have diabetes; if you have cystinuria; if you are taking nitroglycerin; if you are taking antibiotics; or if you are pregnant or breast-feeding. Do not consume with alcohol. Drink plenty of water while taking this product. Discontinue use and consult a health-care practitioner in case of sweating, paleness, chills, headache, dizziness, or confusion, as these may be symptoms of serious low blood sugar.