Elderberry, the most common variety for medicinal purposes being Sambucus nigra, is found broadly across Europe and North America.[1] It has a long-standing history of use by herbalists as a remedy for colds and flus. As will be described below, a significant and growing body of modern human clinical studies has confirmed an important role for elderberry in such settings.

Bioactive compounds in elderberry are considered to be polyphenols and anthocyanins. The content of these compounds has been shown to be considerably greater than that found in most fruits. Elderberry fruit, leaves, and flowers are all rich sources of these compounds. Studies have found these compounds are readily absorbed, with metabolites of them readily detectable in urine upon consumption of various preparations of elderberry.[1][2][3]

Elderberry is valued for its nutritional content as well. It is a significant source of four organic acids, several minerals (potassium, calcium, magnesium, iron, and manganese), as well as significant amounts of vitamin C as well as alpha- and gamma-tocopherol (vitamin E).[1] Elderberry also contains significant quantities of fibre, some of which have important functional benefits. Fibres present in elderberry include pectin, pectic acid, protopectin, calcium pectate, and cellulose. Elderberry also contains an impressive spectrum of amino acids, including nine of the essential amino acids. Glutamic acid, aspargic acid, and alanine are the dominant amino acids present. These important nutritional components are broadly distributed through all parts of the plant, including the berries, flowers, and leaves/stems. Lastly, elderberry seeds are rich in polyunsaturated fatty acids.[1] 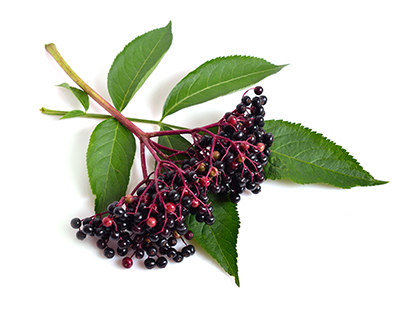 One specific study evaluating elderberry for colds and flus administered elderberry or placebo to 312 economy-class airplane passengers travelling from Australia to various destinations.[8] Participants consumed elderberry or placebo for 10 days prior to travel and for four to five days after arriving at their destination. Participants receiving placebo experienced flu-like symptoms for 117 days, compared to 57 days for participants receiving elderberry. The total Symptom Severity Score in the placebo group was 583, compared to 247 in the elderberry group. Elderberry reduced the total number of colds by 30% (12 v. 17), yet this result was considered not to be statistically significant.

Another study administered elderberry or placebo for five days to 60 participants who had active symptoms of influenza for less than 48 hours.[6] On average, symptoms resolved four days faster among participants receiving elderberry versus placebo. The need for additional medication during the course of infection was significantly reduced among individuals receiving elderberry. The conclusion of the authors was as follows:

“Elderberry extract seems to offer an efficient, safe, and cost-effective treatment for influenza.”

Given the nutrient profile of elderberry, and the rich content of powerful antioxidant constituents, it is not surprising interest has also surfaced in the use of elderberry for metabolic and cognitive outcomes. Nilsson et al administered a berry beverage containing elderberry to 40 healthy participants aged 50–70 years for five weeks, compared to a control beverage.[5] Outcome measures focused on cognitive function and cardiovascular risk factors. The berry beverage significantly decreased total and LDL cholesterol. The berry beverage had no impact on glucose control, whereas the control increased plasma glucose and tended to increase circulating insulin. The berry beverage also improved participants performance on the Working Memory Test of cognitive function. 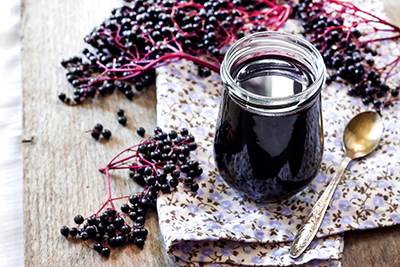 An ever-growing number of natural medicines are seeing their long-held traditional uses validated by modern, human clinical intervention trials. It is fascinating to consider that hundreds, sometimes thousands of years ago, a traditional healer would deduce that a certain plant or substance was appropriate for a particular problem, and sure enough, rigorous controlled human science confirms the same effect that has been known throughout human history. We are truly fascinated by such plants and substances, and feel they are among our most important tools as integrative health-care providers. Hundreds or thousands of years of safe use, validated by modern day rigorous human science: Is there a better place to turn to for guidance on treatment?

A handful of our favourite medicines meeting these criteria include chaste tree for issues relating to the menstrual cycle; ashwagandha for stress, anxiety, and fatigue; and black cumin seed oil for an array of problems including allergies, diabetes, cholesterol, and blood pressure.

Elderberry has been a cherished medicine for colds and flus for hundreds of years. Historical use included the wisdom to recognize that the entire plant delivered important benefit. One can use components in isolation (flowers, berries, leaves, stems), yet juices or syrups made from the entire plant also prove to deliver important outcomes. The safety of elderberry remains unquestioned, and coupled with its pleasant fruity taste, there is little confusion as to why it is also a highly prized remedy for use in children.